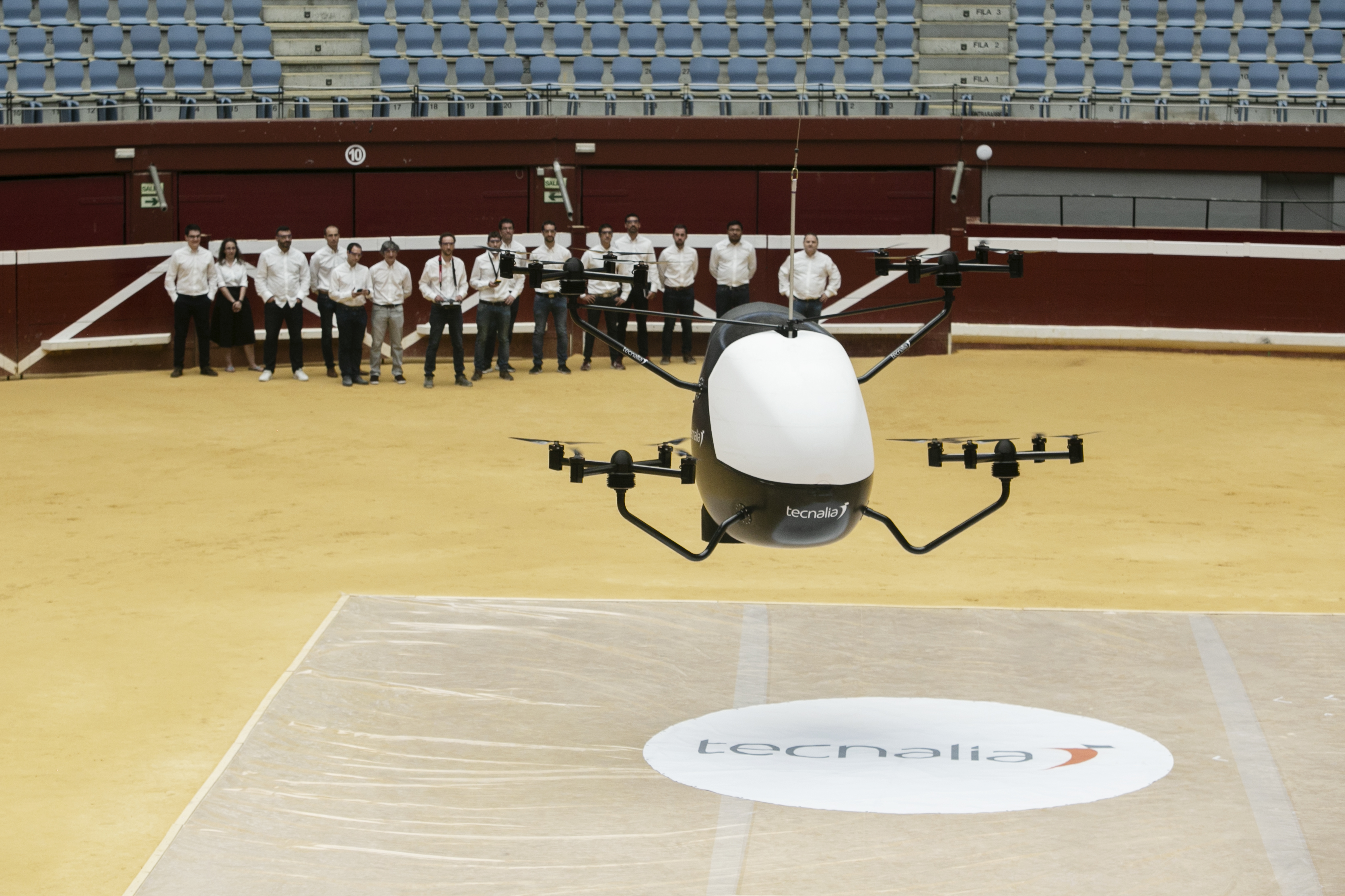 Tecnalia has developed an air taxi, among the top three in Europe and the first in Spain, while in the world “there are no more than ten", to travel autonomously in the cities on short trips. It is a prototype designed to transport a person or loads of up to 150 kg, and cover urban distances of up to 15 km in approximately 15 minutes.

The speed during the journeys would be 90 km/h, although the architecture could allow speeds of up to 190 km/h. The height of the flight will be between 100 and 300 m, at the expense of how current legislation evolves.
It is an aerodynamic cabin, with a total of four drones positioned at the top and bottom that, when moving in a coordinated manner, convey "a feeling of comfort similar to that of a car" inside.
It is a new aircraft concept that could scale from one to four passengers depending on the integration demanded in each city and service.
The Tecnalia air taxi is made up of an aerodynamic cabin measuring 1.8 m by 2 m, with a door and a window, and four drones placed on the upper and lower part of the ship, which allow it to move.
These drones "move independently, but in coordination with each other, which favors the stability, efficiency, precision and controllability of the cabin and, therefore, the comfort inside."
"The main novelty of the aircraft is that, due to its architecture, it allows the cabin to maintain its orientation regardless of speed, a clear advantage over conventional drones and current 'air taxi' applications". "This feature enhances the flight experience, allowing a feeling similar to that of a car or a bus, from a dynamic point of view," he added.

The final product will be autonomous, incorporating the positioning and communication technologies of the rest of the self-piloted vehicles and will be “100% integrable in the city". It will also have precise take-off and landing capabilities in tight spaces, “such as a parking slot."
TECNALIA have indicated that the model will be able to withstand adverse environmental conditions, such as strong wind and rain, as well as minimize annoying air flow when taking off and landing, while highlighting its ability to maneuver. By having more engines, it provides more safety than a conventional helicopter.
Regarding the interaction with the ship, the design has been thought to maximize its integration in the daily life of the user and the city. In this way, there will be interaction via mobile phone, identification of the aircraft at street level, it will be accessible from the rear in a comfortable and simple way, and with enough space for accomodation.

One of the possible forms of exploitation for this type of vehicle is that of a shared service that allows access to these aircraft when they need to travel autonomously to another point in the city.
Likewise, they can be used as urban freight transport vehicles or for quick access in case of emergency. This wide range of use is possible thanks to the various developments that have been necessary in this prototype, and that can be totally or partially reused for other applications in the field of drone-based mobility, he stated.

In parallel, it is working with the different authorities involved in the legislative changes necessary to make it possible. However, countries such as Germany and France are already positioning themselves with pilot projects and in 2020, Los Angeles, Dallas, Dubai, Singapore and Tokyo will carry out the first experimental flights in their cities.